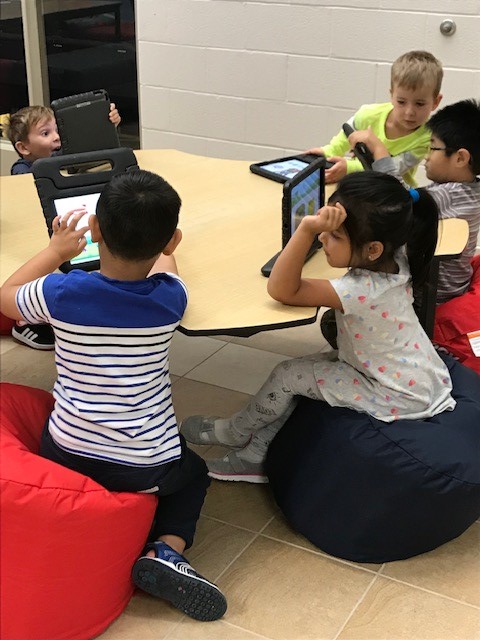 As I quickly rushed down the hallway of Seneca Trail Public School, I couldn’t help but stop mid-stride as I saw a number little students completely engaged in their learning. Seeing them so focused was what made me inquire further as to what they were working on.

It was from conversation with both the ECE and Teacher of the classroom that I found out about how the Kindergarten students at Seneca Trail are using their innovative spaces to engage in their daily learning.  The JK’s were doing a ‘structures’ activity where they needed to create a structure that would hold an apple. Instead of having an adult in the room report for them, the ECE had each of the students share their information through voice notes in OneNote.  This allowed for the student’s exact words to be shared rather than a version of them. This recording took place through the iPad provided to the ECE through the ECE Device Program. Students were actively engaged in their creations while she went around working with students individually on their reporting portion.

While the JK’s were busy at work the SK’s took to the hallway where a comfortable workstation had been set up.  They worked together through activities on their iPads in their creative open space with their classroom teacher.  Students were engaged with not only their iPad but of course what was going on, on the other iPads around them. It continued however, to be very focused learning due to the innovative space provided as well as the direction by the staff and the tools they provided.